Genesis of Centre for Aerospace and Defence Laws (CADL):

The journey of Air and Space Law courses in NALSAR University of Law started under the pioneership of Prof. Dr. V. Balakista Reddy way before he stepped into this esteemed University. Hailing from a modest family, Prof. Reddy strived hard to study in this competitive world. He worked part-time and studied at an evening college during both Intermediate and Degree. He did his LL.B in the same line while working part-time. He completed his LL.M in International Law from Osmania University with flying colours.

Later, due to his interest and zeal to contribute to the society and country, he explored the most unexposed area of Air and Space Laws in India. He did his M.Phil and PhD in Air and Space Law from Jawaharlal Nehru University (JNU) during which he had privilege to write the first book on Air and Space Laws. He co-authored and edited the book named “Recent Trends in International Space Law and Policy”, with his Guru’s Dr. V.S.Mani and Dr. S.Bhatt. A review on the said Book was published in Journal of Air and Space Law by University of Leiden, the Netherlands in 1997. Dr. Reddy was appreciated for his vision of India’s Space Sector and his views on Indian Aerospace Industry.

In words of Prof. Balakista Reddy –

The review published on my work in Journal for Air and Space Law by Leiden University has encouraged me to further expand my horizons and to encourage studies and research in Aviation and Space sector. With that in mind, in 2000 I joined NALSAR University of Law and continued my quest to enable and help to explore the Air and Space Laws. This led to the introduction of first seminar course for Air and Space law in NALSAR University of Law in 2001-02. Many students opted this emerging subject and benefitted from the teaching and research in this area. Mr. Sagar Singamsetty our first batch student at NALSAR, took up this course in 2001-02 and later secured admission into Air and Space Law LL.M. Programme at Leiden University with Nuffic Huygens Scholarship by the Netherlands Government. After completing his LL.M. programme, Mr. Sagar had joined Legal Counsel at AerCap and later became Legal Advisor at FedEx Europe. Presently, Mr. Sagar is a Senior Policy Advisor, Amazon, Europe. This is just one success story of our First batch student. There are many other students who pursued this course and carved out a niche in their careers. Some other prominent achievements to name are Ms. Usha Balasubramanian, who secured Commonwealth Scholarship to study at McGill University, Canada and Ms. Ruchika Rao, who also got Scholarship to study Air and Space Laws at Leiden University. 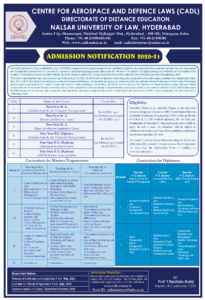